Nowadays that is almost the same amount in euros, by the way. That is to say, a billion more or less isn’t going to make a major difference – at least not when it comes to ad fraud. Read the title again, dear advertiser… 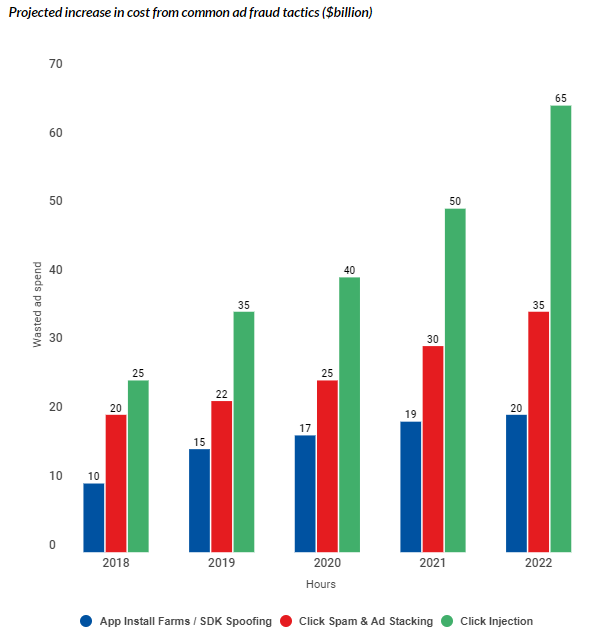 The graph shows different forms of ad fraud, with ‘click fraud’ being the most important type. This is not just artificial clicks generated by Indonesian or other exotic bots; competitors are also keen to spend your marketing money by performing large amounts of fake clicks. And even more striking is that some business owners themselves also want to attract some extra ‘attention’ using fake clicks in order to move up in the Google search algorithm.

The so-called ‘fraud bots’ are part of ordinary ‘bots’ and they account for – wait for it – 52% of all internet traffic! So more than half of everything that happens online is performed by computers. The proportion of ‘fraud bots’ in that category of ordinary bots would, it is estimated, make up a large part of that 52%! In short, soon almost half of what happens on the internet could be fraud….

The problem is of course that this click fraud is performed by malware in quite a few cases. You, as a law-abiding citizen, may not even know that your IP address is being used to generate clicks that are not actually there.

What do we do about it?

Google is already taking some commendable initiatives, but you as an advertiser are at the wheel. Try to target your ad better, because the better you target the desired audience, the more difficult ad fraud becomes. In addition, you do not always have to hunt for the popular keywords. Ads that are less focused on keywords are more difficult for scammers to find and therefore less easy to abuse.

But above all there is of course yourself! Monitor your ads and the related expenses via a dashboard. If no dashboard is available, ask for the domain level placement reports. This way you can see where your ad is going. Be sure to also check the degree of focus – that is, if your ad is limited to a certain number of sites, rather than being displayed on many different domains and apps, and you do not get a large reach, then something is wrong. You can also glean a few things from your analytics: many clicks at unusual times, short clicks of barely 1 second, and so on. As soon as you spot something suspicious, you need to intervene.

In addition, there are also some useful tools on the market at very affordable prices, which are worth considering!

At fma Digital, we are also stepping up a gear to detect all kinds of things even better. Most importantly, however, we should not underestimate the problem. The ANA (the UBA of the USA, so to speak) estimated ad fraud in 2019 at about 5.8 billion USD. Take another look at the previous graph and more specifically at the number for 2019… it was published by Pulse Newsletter at the beginning of June, and the ANA initially displayed it on its website under the Marketing Knowledge Center in the ‘Industry Insights’, but the newsletter was taken down even faster than it had been published…

So even the industry is afraid to face it… for shame! We should not bury our heads even deeper in the sand because we can measure fraud better now. On the contrary, we all have to do something about it together, or we will not succeed!

But to conclude, dear advertiser, it’s time for the only real message of this fma blogpost: to wish you a pleasant, fun, relaxing and above all virus-free holiday. Catch up on everything you haven’t done in recent years, and do so with gusto!

See you some time in the autumn.